flyadeal (Arabic: طيران أديل‎) is a Saudi low-cost airline based at King Abdulaziz International Airport in Jeddah. It is owned by Saudi flag carrier Saudia. The airline began operation on 23 September 2017 serving domestic destinations. Saudia, the flag carrier of Saudi Arabia, announced the creation of flyadeal on 17 April 2016. The venture is part of Saudia Group’s SV2020 Transformation Strategy, which aims to elevate the group’s units into world-class status by 2020. flyadeal targeted domestic travelers, Hajj and Umrah pilgrims, and the rising number of tourists, among other groups. The airline launched flights on 23 September 2017, linking Jeddah to Riyadh. 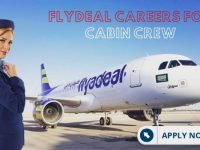